The Rotational Dynamics in Haramein-Rauscher Metrics and the Monopolic Current 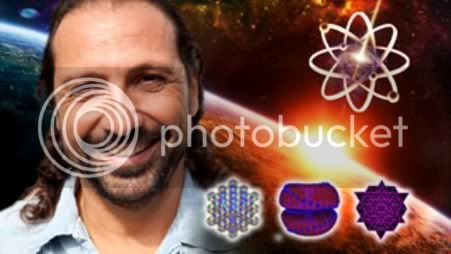 Tony Bermanseder wrote:
This commentary shall be in the form of a particular address of this excerpted Haramein-Rauscher paper in extending the theoretical foundation for that model so indicated.
> Firstly the electromagnetic coupling of the Black Hole (equivalent) to the gravitational field is shown to directly derive from a mass-independent metric background, which introduces the property of inertia as a 'natural monopolic' superconductive currentflow.
> And secondly, this 'monopolic electricity' is then described as a consequence of particular Planck-String couplings preceeding the birth of the thermodynamic and classically relativistic cosmogenesis in its unified selfstate of unbroken supersymmetry.
> It shall be shown, that any mass M is quantised in a Monopole mass mM=mP√Alpha in its Schwarzschild radius and where the characterising monopolic Schwarzschild radius represents the minimum metric displacement scale as the Oscillation of the Planck-Length in the form 2LP√Alpha ~LP/5.85~3.4x10-36 meters.
>
>
> Reference:

> These turbulent perturbations often diffuse and propagate transverse to the magnetic lines of force. Many higher order terms and a number of coupling constants are not directly amenable to an analytic approach and require computer simulations. Under such variable gravitational and electromagnetic conditions, patterns can emerge under cyclical interactions but also large dynamical unpredictable instabilities will occur. Our wave equations must accommodate these two cases. Some of the more detailed analytic approaches can be found in reference [5]. We describe examples of black hole plasma systems for stellar, and supernovae phenomena. In this paper, we express in detail the balance equations between the gravitational collapsing system and the surrounding plasma. Balance systems act in a thermo-plasma-gravitationally coupled systems that obey unique structures in space, some of which we present in this volume.
> We can treat the electromagnetic field in terms of spherical harmonics as an approximation. We have solved Einstein's field-curvature equation with a centrifugal term that arises out of the torque term in the stress-energy tensor term, and source term and demonstrate a possible balance equation at the event horizon [3,4].
> The high magnetic field of neutron stars of about 1014 Gauss, and possibly the black holes also act to direct and repel the plasma against accretion at the event horizon surface. We find soliton or magneto-acoustic plasma states as solutions to the relativistic Vlasov plasma equations solved in the vicinity of a black hole ergosphere.
> .......

We have a vast new set of tools to comprehend the processes of astrophysical and cosmological phenomena, atomic and collective matter states. For example some of the collective state phenomena we have considered are accelerator "fireballs," Bose-Einstein condensates, Fermi electron states, MHD and BCS descriptions, all of which obey soliton dynamic solutions. Theoretical and experimental findings and relativistic formulations, quantum theory, electromagnetic interactions can well be described in terms of topological structures and group theory. The fundamental base of our approach is to consider that the topological structure of a torquing spacetime, and its Coriolis gyroscopic dynamics, has critical aspects of unification theory.
> We pursue this point further in references [39,101,102] when we consider atomic, nuclear, and quantum physics in a nonlinear space. When a torque and Coriolis term is considered for the formation of spin/angular momentum we find that the dual torus topology occupies a fundamental role in both astrophysics and quantum particle physics. The Haramein-Rauscher approach takes spin and rotation properties as fundamental to the structure of the spacetime manifold. We have identified the properties of the structure of the vacuum itself from fundamental coherent polarized states of matter in the facility of astrophysical black hole event horizons. That is to say, we have demonstrated that the properties of matter in superclusters, galaxies, supernovae and their vicinities, for example, could exist in resonant states, only if the vacuum is structured. These considerations may also be utilized to explain the effects that are currently attributed to dark matter and dark energy.
> In the words of Nobel laureate C. N. Yang, of the Yang-Mills equation "Einstein's general relativity theory, though profoundly beautiful, is likely to be amended... that the amendment may not disturb the usual test is easy to imagine, since the usual tests do not relate to spin... somehow (the amendment) entangles spin and rotation" [103].
>

I am Mr. Haramein's assistant at The Resonance Project Foundation. We have received your email and we are grateful that you are starting to utilize the Haramein-Rauscher Solution in your approach to cosmogenesis. Your paper includes commentaries from Dr. Hans Schatten, can you indicate to us where these commentaries were published so that we may cite them. Dr. Rauscher and Mr. Haramein are studying your results and would love to comment further.

Thank you for letting us know about your work.

Thank you very much for attaching this information. Again, we do ask for
your understanding and patience in terms of a more detailed reply, as Mr.
Haramein is currently under deadline for some important projects.

Please find attached the pdf format of my critique on the Haramein-Rauscher
plasma paper.

"good work, is good work ~ this work is beyond good" Love - Susan

"Will iT to be, so, iT will be, and, so iT iS" Thirteen ~ 13 ~ Susan Lynne Schwenger aka Seraf'ina aka The eXchanger aka Talks with Thunders aka Kit Si Nu

The Bermanseder - Schwenger The 65th AHUA solves The Equations of The End Time of The 12th Grand Cycle at Sun-Set on 16 DEC 2013, and,

SusanLove; yes look at this excerpt from the above.

You see the X is Phi; so this is not made explicitly stated in the technical critique. So this formalism actually shows HOW the PHI is connected to the Alpha of the physicists; the strings of higher D and the birth of the universe.

What depicts what you were posting and presenting on the skype channel. So the technical lingo also represents your metaphysics - as the mainstream (albeit revolutionary there) science of material reductionisms.

The mathematical pentagonal supersymmetry from the above then indicates the physicalised T-duality of M-theory in the principle of mirror-symmetry and which manifests in the reflection properties of the heterotic string classes HO(32) and HE(64), described further in the following.
Defining f(S)=#=1/f(G) and f(E)=#2.f(S) then describes a symmetry breaking between the 'strong S' f(S) interaction and the 'electromagnetic E' f(E) interaction under the unification couplings.
This couples under modular duality to f(S).f(G)=1=#55 in a factor #-53=f(S)/f(G)={f(S)}2 of the 'broken' symmetry between the longrange- and the shortrange interactions.

SEWG=1=Strong-Electromagnetic-Weak-Gravitational as the unified supersymmetric identity then decouples in the manifestation of string-classes in the de Broglie 'matter wave' epoch termed inflation and preceding the Big Bang, the latter manifesting at Weyl-Time as a string-transformed Planck-Time as the heterotic HE(64) class.

Interview with Nassim Haramein from Radio Serenidad on Vimeo.

We talked about the structure of the vacuum and how he found the gap between science and spirituality. It is a very, very interesting dialogue and also, for lay people that don't understand any physics, somehow it makes all sense. Nassim has a way to reach people even with his technical scientific terms and we hope to have more of him. Hope you enjoy it.